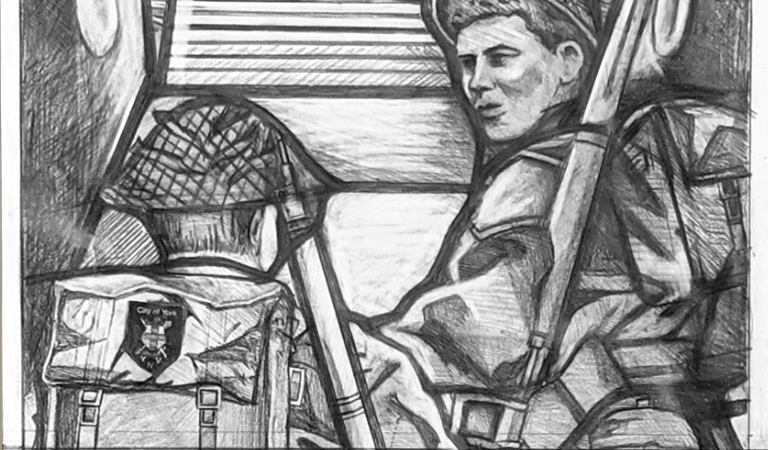 The role of the York Normandy Veterans on D-Day and in the Normandy Campaign is to be commemorated in a new stained glass window, designed by the artist Helen Whittaker of Barley Studio, York. The window is to be installed at the church, where the veterans have attended services on Remembrance Sunday.

The window commemorates the D-Day landings and the Normandy Campaign, as seen through the eyes of the last surviving members of the York Normandy Veterans. The Veterans had desired a window to memorialise their comrades and cooordinator for the York Normandy Veterans, Nick Beilby, has been working with the church to install the window there. Helen’s design has been inspired by the memories and recollections of surviving veterans from the York area (so evocatively described in the verbatim play Bomb Happy by Helena Fox), and pays tribute to their inspiring spirit of comradeship, irrespective of rank or position. The window’s creation is to feature in an upcoming television documentary.

The artwork is divided horizontally into three tiers; land, sea and sky, representing respectively the British Army, the Royal Navy, and the Royal Air Force, working together in the largest Combined Armed Forces operation to date.

At the heart of the design, two men can be seen waiting inside a landing craft at the dramatic moment when the armoured doors open and the ramp is lowered. Their backpacks proudly bear the badge of the City of York Normandy Veterans (YNV). In the distance, we can see the smoke of battle over the sea and the Normandy shore. The men are both excited and terrified, but determined; ‘it was all new … like a boy scout adventure’.

One of the men turns back, gesturing to his comrade in support and offering strength and trust, so they can face the coming assault together.

The base of the design features words taken from the hymn Judge Eternal, Throned in Splendour: “and the homestead and the woodlands plead in silence for their peace”.

The window is estimated to cost around £8,000, and the Veterans themselves have led a significant amount of fundraising towards its cost, but are hoping for donations towards the cost of the window.

See also coverage in the York Press and York Mix